Tracking the Gray Ghost – the Wolves of Northwestern Wyoming

A bison bull heads into deserted Clearwater Campground in the Shoshone National Forest.

Early spring is a quiet time of year in the Shoshone National Forest. Once bustling with wildlife activity, the forest is now almost silent.  Bighorn sheep still frequent the area, but the rams have concluded their dramatic battles and quietly return to small bachelor herds.  Tiny northern pygmy-owls are no longer calling in search of mates and leave the pine forests they once frequented in search of higher ground.  In March, large elk herds begin to move to the river bottom to feast on vegetation but the herds disappear before the first rays of sun appear over the horizon.  Following the elk down from the high country,  gray wolves also disperse before dawn leaving only their tracks as evidence of their presence.

It was on one of these mornings that I decided to travel through the North Fork in search of wildlife.  Just as the weatherman predicted, a light dusting of snow had fallen during the night making for excellent tracking conditions the following morning.  Wildlife watching is my first passion, but there’s something special about tracking animals.  Of course the best thing is to find the animal you’re tracking, but the act of identifying the tracks and trying to figure out what the animal was doing is just as rewarding.

Judging from the amount of tracks I found that morning, it seemed the wildlife were very active the previous night. I first spotted the big round prints of  bison, traversing the roadway.  At the junction of Clearwater Creek, I encountered the familiar herd of  seven bull bison that winter on the North Fork.   Amazingly, these  bulls leave Yellowstone National Park every autumn to spend winter and spring at lower elevations in the Shoshone National Forest.  They then return to Yellowstone for the August rut.  Although the weather in the National Forest is more hospitable than the high country of Yellowstone, this area is often plagued by howling winds and frigid temperatures.  Thankfully, the snow cover is much less than Yellowstone which allows the bulls easy access to the dried  forage they subsist on during winter.  For all the years I’ve lived in Wyoming, I’ve never seen more than these few bulls during winter and  spring and often wonder why no additional bison venture over Sylvan Pass to enjoy the mild weather along the Shoshone.  It seems only the bison know the answer to that question and they’re not talking. 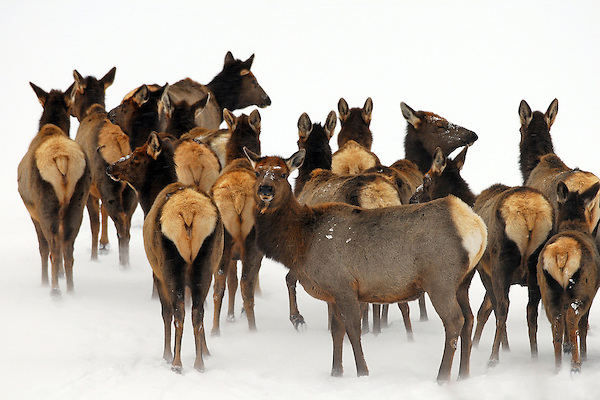 A herd of wintering elk in the Shoshone National Forest.

Leaving the bison, I noticed a swath of track in the road, an indication that one of the large elk herds had recently crossed. There were still a few stragglers making their way up from the river so I stopped my car to let them pass.  Eyes blazing with fear, the elk ran quickly across the street and up the mountainside to join the rest of the herd.  I then saw what looked like small canid tracks, and pulled off the road to identify them.  The distinctive, almost straight line of alternating prints indicated the tracks of a lone red fox. 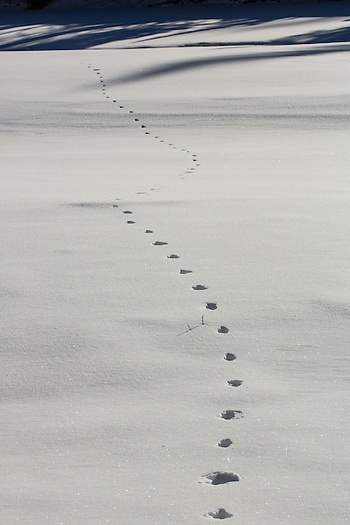 The distinctive tracks of a red fox in the snow.

With a beautiful morning breaking on the horizon, I thought I’d follow the tracks to see what I could learn about the fox.  Like most animals, the fox preferred walking on a trail to crashing through the snow-covered brush.  After following the trail for 1/4 mile, some larger canid tracks appeared, covering the smaller prints of the fox.  It seemed a wolf had used the same trail as the fox sometime during the evening.  I followed the tracks until one track became the tracks of two, then four, then six as the wolf met up with his pack-mates.  The tracks veered on and off the road until they finally disappeared into the brush and crossed the frozen Shoshone River.  I never did find the wolves that day, but just knowing that I was sharing the trail with wolves made my heart beat a little faster. 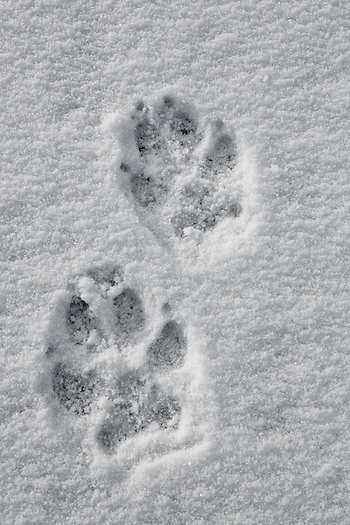