For some it would be the grizzly bear, for others perhaps the wolf or the elk, but if I had to choose an animal to symbolize Yellowstone and the American West, it would be the mighty bison.  I’m a bit partial to these magnificent creatures who will always hold a special place in my heart.  Majestic and powerful, bison have been revered by Native Americans for centuries. As I look around my home decorated with sculptures, paintings and photos of bison, I am the first to admit that I too am under their spell. Not surprisingly, bison are one of my favorite animals to photograph and each year I look forward to seeing the herds gather together in Yellowstone during the summer months.

Watching the bison in Hayden Valley, I imagine what it must have been like hundreds of years ago when the great herds stretched out as far as the eye can see.  As recently as 1800, bison roamed North America from coast to coast, with population numbers reaching  more than 50 million. Numbers dwindled rapidly during the extermination of the great herds by buffalo hunters and by 1889 only 542 bison remained.  Thanks to the efforts of conservationists working diligently to save them, the bison population now holds steady at approximately 150,000 on both public and private lands, including a healthy population of over 3,500 living in Yellowstone.  Within Yellowstone, the bison herd is divided into two distinct sub-herds. The Northern Herd is comprised of approximately 2300 animals and ranges from the north entrance at Mammoth Hot Springs through Blacktail Plateau into Lamar Valley. The Central Herd, comprised of 1400 animals, ranges from the Madison River Valley into Hayden Valley and the Upper and Lower Geyser Basins.

A bull bison stands watch over the herd gathered in Yellowstone’s Hayden Valley.

Each year, as spring turns to summer, I wait patiently for the Central Herd to return to Yellowstone’s Hayden Valley. Bull bison, who live in small bachelor herds or remain solitary for most of the year, begin to gather in the valley in May. Here the bulls will remain until the cow/calf herds join them later in the season. These maternal herds travel from calving grounds outside the park to summer in Hayden Valley.  Their journey starts in late May as these family groups navigate along the Madison River, through the Mary Mountain Trail to their final destination along the Yellowstone River. 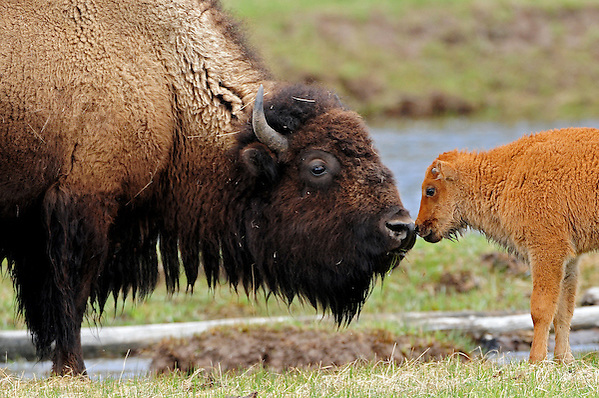 A bison cow and calf greet each other after crossing the Madison River en route to their summer range in Hayden Valley.

Cows and calves arrive in late June, just in time to feast on the greening grasses and sedge covering the valley floor.  For a while, all seems peaceful as bison calves tussle together in play groups while adults doze in the midday sun.  The mood changes rapidly and by mid-July, the deep, rumbling sounds of bull bison in rut can be heard throughout the valley. 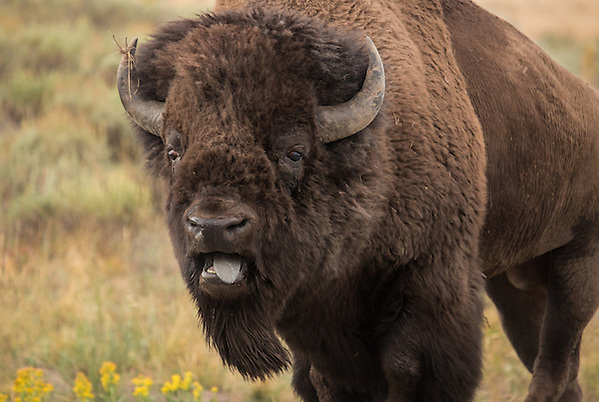 A bull bison bellows towards his rival as the summer rut begins.

Watching these one ton bulls paw at the earth, dust-up in wallows and battle for the right to breed during the rut is an incredible sight. Like other ungulates, bull bison rarely fight, but when they do it is such an amazing display of power that you can almost feel the earth shake. Battles start when a challenger approaches a dominant bull who warns away his rival by swinging his horns, bellowing and pawing the ground.  If these tactics don’t deter the challenger, the two then clash head to head. When fighting, the goal of each bull is to hold his opponent’s head between his horns. Failure to hold the horns in position can lead to goring of the opposing bull’s neck. 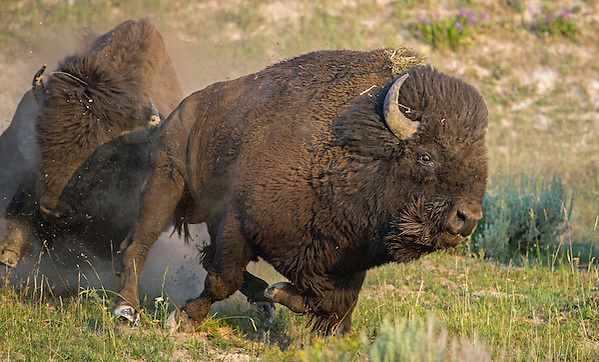 A dominant bull bison chases a rival from the cow he is tending. 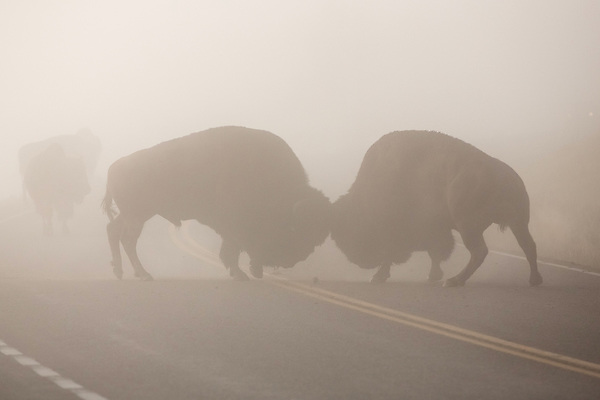 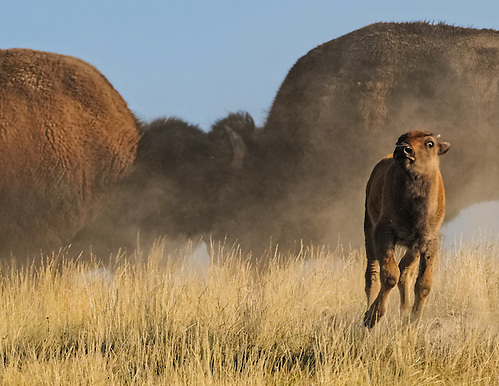 Most battles end up with the defeated bull withdrawing in retreat, but bulls sometimes die from the injuries they sustain during these violent clashes.  In fact, so many bulls perish from the ravages of the rut, that they have become an important late summer food source for grizzly bears and other scavengers within the confines of the Park. 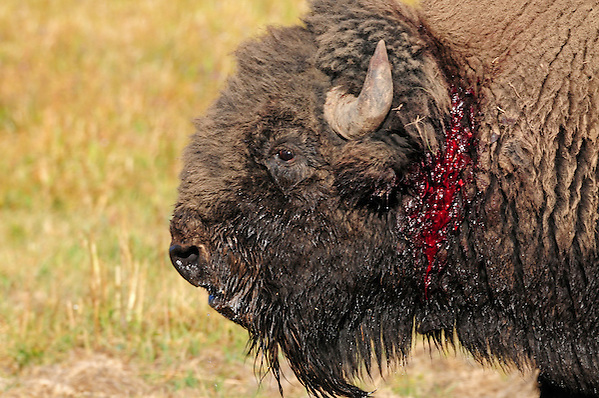 When the fighting has ended, the victorious bull returns to the cow he has been “tending”.  The bull remains with the cow until she is ready to breed and once bred, he moves on to another cow. As mid-August approaches, battle-weary bulls begin to leave the breeding herds and return to their solitary ways.  This gives smaller, less dominant bulls a chance to breed with the remaining cows.  The rut continues into September, but after a while, it starts to quiet down- leaving me waiting for next year when these one ton giants will once again do battle in the wilds of Yellowstone. 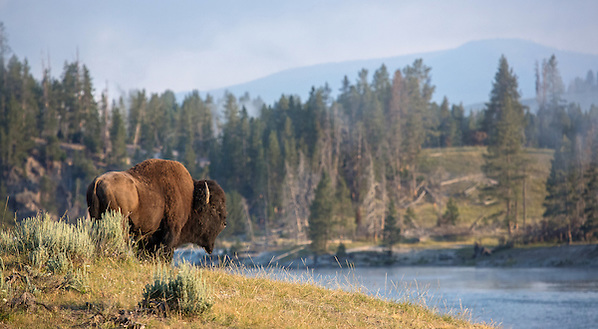 After breeding, bull bison once again return to their solitary existence.