Grizzly Bear #211, known to photographers and bear watchers as Scarface, is one of the biggest wildlife celebrities in Yellowstone National Park.  At 24 years of age, this legendary bruin got his nickname from the extensive facial scarring on his massive head.  To many who visit the park, grizzly bears are an enduring symbol of the true wildness of Yellowstone.  Viewing these magnificent animals is an unforgettable experience, but a sighting of the renowned Scarface is even more memorable.

Born before the reintroduction of wolves into Yellowstone, Scarface has seen many changes during his long life. Over the years, he has been observed in almost every corner of the park, although the meadows and slopes surrounding Mount Washburn are a particular favorite.  Always in search of food, Scarface can be found munching biscuitroot along Dunraven Pass one day while driving off competitors from a carcass site in Lamar Valley the next.  Grizzlies in the Greater Yellowstone Ecosystem have an average  life expectancy of up to 25 years, making 24-year-old Scarface one of the park’s senior citizens. But even at his advanced age,  Scarface is by no means the oldest grizzly in the park.  At the time of this writing, there are currently 2 radio-collared grizzlies living in Yellowstone that have reached the ripe old age of 28. 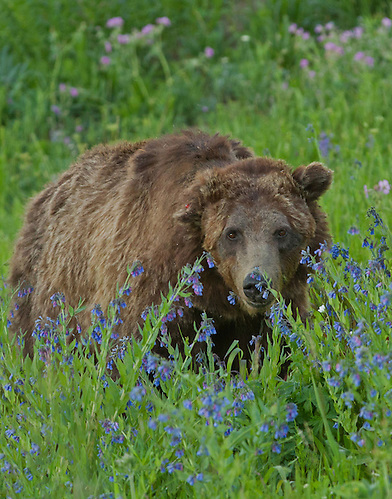 Scarface forages in a field of summer wildflowers along the slopes of Mount Washburn.

Scarface has been closely monitored throughout most of his life.  He was first collared as a three-year-old in 1993.   At that time, it was reported that a habituated, unmarked sub-adult grizzly bluff charged visitors who stopped roadside to view the bear foraging near Mount Washburn.  As Kerry Gunther, Yellowstone’s Bear Management Program Leader, explained,  “Because of safety concerns, a trap was set to capture and radio collar the bear so that its behavior could be more closely monitored. Three-year-old male Grizzly Bear #211 was captured for the first time in that trapping operation”.   Gunther explained that once Grizzly Bear #211 was captured, radio collared, and released, the bluff charging incidents in that area stopped. 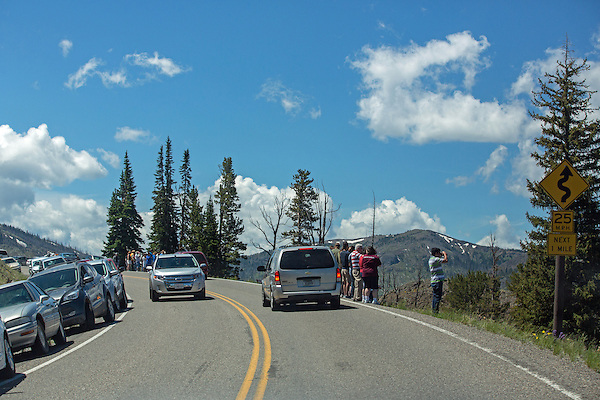 Bear watchers gather along Dunraven Pass to catch a glimpse of Scarface, foraging on a nearby hillside.

Although he has been collared 9 separate times, Scarface wasn’t specifically chosen to be a research bear.  At the time Scarface was first captured in 1993, Bear Management researchers only planned to monitor him for a few years until his radio collar fell off.  Scarface made the transition to research bear when he was again captured in 1995 during a research trapping operation.  How long a bear remains a research bear depends on how often the bear is captured during trapping operations.   Some bears are only captured once during their lifetime.  Others, like Scarface, are not very trap-savvy and are recaptured more often.

Although female grizzlies are more commonly monitored with radio collars to provide information about cub production and survival, male grizzlies captured while trapping for females are collared as well.  Both male and female bears provide researchers with important information regarding the health of Yellowstone’s grizzly population.  From each bear’s radio collar, researchers learn about home range, rates of movements, habitat use, food habits, genetic diversity , mortality, survival, habitat linkage to other ecosystems and reproductive success.

In addition to a  radio collar, each time a bear is trapped, blood and hair samples are taken and information from these samples is added to an ongoing DNA database.  These samples provide researchers with specific information about DNA, diet and disease.  From his blood samples, researchers learned that Scarface tested positive for canine distemper and Brucella abortus, more commonly known as Brucellosis.  Approximately 17% of all grizzlies in the Greater Yellowstone Ecosystem test positive for Brucellosis which they are exposed to when preying on and scavenging infected ungulates.  Grizzlies are also quite susceptible to infection with canine distemper virus, but like Scarface, they rarely show symptoms of the disease.

DNA tests performed on research bears are also used to gather information about bear lineage and possible offspring.  One of the most interesting facts revealed by DNA analysis of Scarface is that he fathered another well-known bear, Grizzly Bear #665, also known as the Dunraven sow.  With both bears frequenting the same general area, rumors swirled among bear watchers that these two bruins were connected in some way.  It was an exciting revelation to at last find out that Scarface and the Dunraven Sow were in fact, father and daughter.

DNA evidence reveals that Scarface is the father of the Dunraven sow, seen with one of her cubs in 2010.

Always on the move, the data collected from Scarface’s radio collar indicates that his home range runs from the east side of the Gallatin Range, east to the west side of the Absaroka Range and from Lamar Valley south to Hayden Valley.   This extensive home range is typical of an adult male grizzly in the Greater Yellowstone Ecosystem whose territory can encompass up to 875 square miles.  Males must travel these great distances in search of a mate during early summer and to find adequate food throughout the year.  Although Scarface has been observed in almost every section of Yellowstone, telemetry data collected from his collar indicates that the big male has never ventured outside the borders of the park.

During the summer of 2013, Scarface lost his 8th collar. In September 2013, he was again trapped and collared, this time in the Lamar Valley.  As with all bears captured during trapping operations, researchers assessed Scarface’s condition and at the time of trapping, his condition was considered healthy.  Scarface weighed 430 pounds, with 20% body fat. His body condition was rated as a 3 on a scale of 1-5, with 1 being emaciated and 5 being obese.  It was noted that his incisors were worn to the gum line, as is common among older bears.  In addition, his right ear was ripped and the cartilage broken, causing the ear to flop over. Researchers also made note of the multiple old scars on the bears head and face. 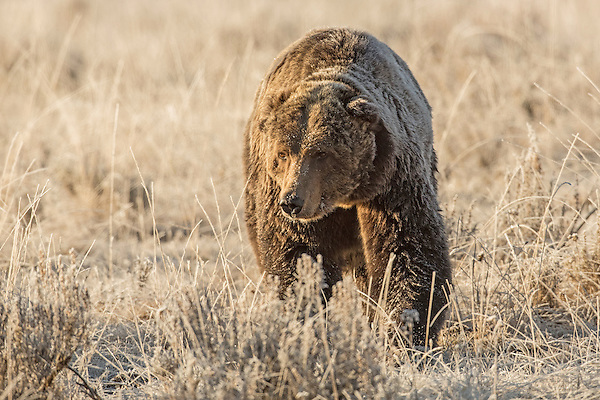 A frost-covered Scarface travels through Hayden Valley during late October 2013.

Researchers first observed significant scarring on Scarface’s head during a trapping operation in 2000. Prior to 2000, Scarface was not known to have any major scars on his face. There has been a lot of discussion surrounding the origin of Scarface’s many facial scars. Some blame his scars on a lifetime of battles won and lost, while others believe Scarface disfigured himself while trying to remove his radio collar.  When questioned about this issue, Gunther explained  that he was not aware of any evidence that Scarface’s facial scars were self-inflicted in an effort to get his collar off.  He stated that  “when radio collars are put on, they are slipped over the bear’s head, so bears don’t have to work that hard to get them off, and they do sometimes slip them off.  Many male bears have similar facial scars the first time they are captured, indicating the wounds are not caused by the collars.   Male grizzly bears commonly have multiple canine puncture and claw wounds on their head, neck, face and ears.  In many instances, portions of ears may be missing.  These wounds are inflicted by other grizzly bears during fights for estrous females, ungulate carcasses, and while forming the dominance hierarchy.  When bears kill other bears, it is most often from bites to the head and face that crush the skull.  Grizzly bears also fight with wolf packs while attempting to usurp wolf-killed elk and bison carcasses”.

Gunther has never observed a grizzly bear injuring himself in an effort to remove his radio collar.  In the case of Scarface,  he feels that the bear’s many wounds were not self-inflicted but were obtained during battles with other grizzly bears. 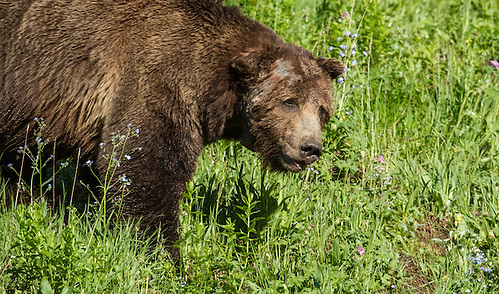 Extensive facial scarring is clearly visible on Scarface’s right side.

How Scarface obtained his many scars will always remain a mystery, but the fascination with this iconic grizzly will continue throughout his lifetime.  As happens each year as spring approaches, bear watchers anxiously await news that Scarface has made it through yet another winter.  When evidence of his first sighting is confirmed, it will be acknowledged with a sigh of relief and with hopes that we will again have the opportunity to see this amazing bear one final time as he makes his way through the wilds of Yellowstone. 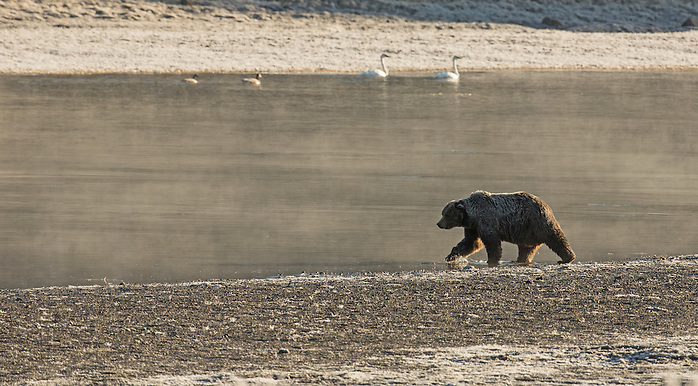 Old Scarface-Master of his Domain.