Drama on the North Fork

I never thought I’d become attached to a moose cow and her calf, but as we all know, our feelings are out of our control.  The story of these two started when a moose cow ventured to a secluded area to give birth. Her little calf was born on May 21 on an island in the middle of the Shoshone River, just twelve miles outside of Yellowstone’s East Entrance.  That’s not too unusual,  since moose often give birth on islands to keep their helpless calves safe for the first few days of their lives. Unfortunately this year’s extremely warm weather caused the mountain snows to melt rapidly, flooding parts of the Shoshone.  After a few days, the rising river submerged most of the island and stranded the cow and her newborn calf far from shore.

I first stopped to photograph the pair when the calf was less than one day old. The little fellow could barely stand and when he was able to get to his feet a few times a day to nurse, it was quite an effort. While watching the pair, I couldn’t help but notice the rising water of the Shoshone that was swallowing up the shoreline of their tiny island, leaving only a few bare patches where the moose could bed down. 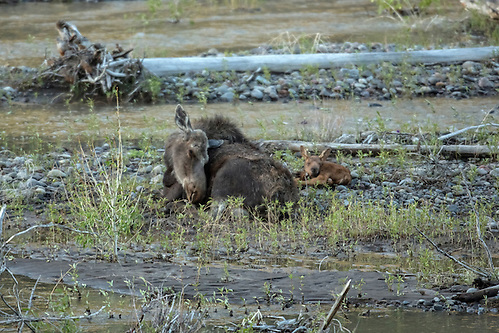 The moose cow and her newborn calf bed down on their vanishing island in the Shoshone River.

Because of the rising river, I was worried that this little drama would end badly, so on that first day I vowed to myself that I wouldn’t spend time with the cow and her calf for fear of the heartbreak I would feel if tragedy struck.  I stuck to that vow for four days, although I would always quickly check on the mother and calf each time I drove past.  For those first few days, the calf didn’t move much and spent most of his days sleeping alongside his mother or standing to nurse as the river continued to rise.

When the calf was five days old, I was surprised to see him up and about during a drive home from Yellowstone.  Although not yet steady on his feet, he would follow his mother around their tiny island as she grazed.  I spent six hours watching the pair that day and from that moment on I knew I could no longer keep my vow.  In that short time, I grew attached to this little family and became very concerned that the calf would never be able to safely swim across the river to the mainland.   A friend of mine had already contacted Wyoming Game and Fish and was told that they must let nature run its course so all I could do was watch and wait. 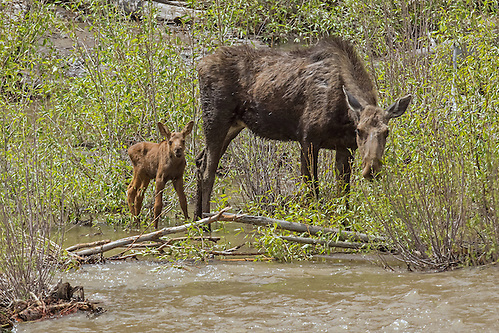 The cow and calf approach the shore of their tiny island.

By day six, the moose cow had eaten all the willow on the tiny island and needed to head to shore to find more forage.  I didn’t think she could cross the river without a struggle, but with legs almost four feet long, the cow easily navigated the raging waters of the Shoshone.  Unfortunately, the river was too much for her little calf to cross.  After following his mother to the shallow water, the calf retreated to the island when the river got more than a few inches deep. 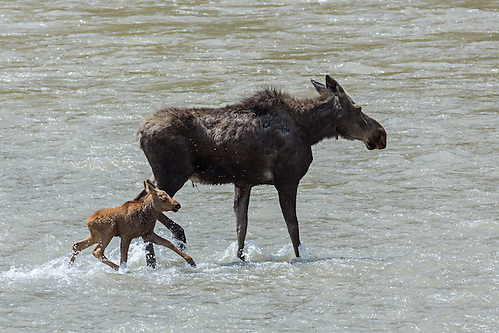 The moose calf follows his mother into the river for the first time.

Once he returned to the island, the calf  would gaze towards his mother and begin crying loudly.  His sorrowful cries were loud enough to alert predators to his presence on the island so when the cow heard her calf bawling, she would wade back to the island to quiet him down.  Unfortunately, each time she would leave the island he would begin to cry again.  Hearing the moose calf cry was heartbreaking, but mother moose knew what she was doing.  After reassuring her calf for one final time, mother left her crying calf on the island and went back to foraging.  Not too much time passed before the little guy finally cried himself to sleep. 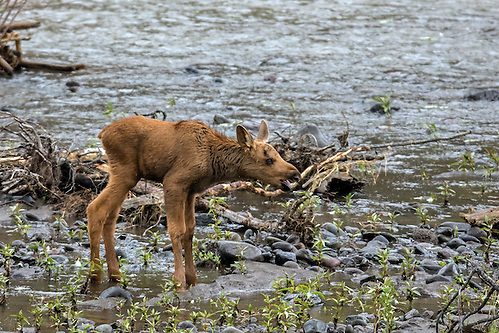 The frightened calf calls for his mother who has left the island to forage on the mainland.

The cow and her calf repeated this out and back dance into the river numerous times each day until the calf finally ventured into the deep water behind his mother.  Almost immediately, the swift moving current knocked the calf off his feet and swept him downriver. As his head disappeared under the water, those watching feared the worst.  Luckily, the current pushed the calf into some debris where he was able to regain his footing and return to the island where he collapsed in a heap.  After resting for a few hours, the calf made a few more attempts to enter the river with his mother but he never ventured more than part way across before he turned around and went back to the island. His mother would then make her way to the mainland where she would forage, always keeping one keen eye on her distant calf. 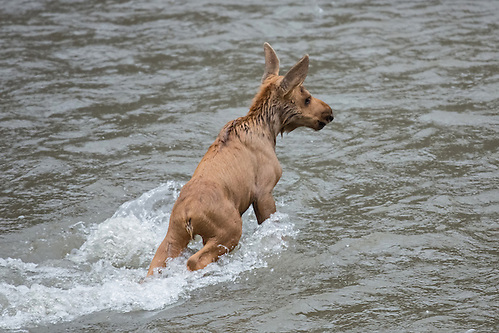 Tired and frightened, the moose calf struggles back to the island after nearly being swept away by the raging river.

After worrying for days about how the rapidly rising Shoshone River would swallow up the tiny  island, something unexpected happened.  The weather which had been sunny and hot most of the week changed dramatically.  Where there had been relentless heat, there were now clouds, cool temperatures and misty rain.  After days of watching the river rise, perhaps these cooler temperatures would cause the river to finally recede.  This change in the weather could be just what the moose calf needed to make it off the island. At this point, the little calf could use all the help he could get!

After over a week on the island, there wasn’t any forage left for the moose cow to eat, so she now made several trips to the mainland each day to browse on willow growing along the shore. Each time she was ready to cross, the cow attempted to coax her little calf into the river, but he would always turn around once the water got too deep. On day eight, the cow spent a few hours walking back and forth into the river with her calf, going a little further each time, but still the calf would turn around when he hit deep water.  After watching them for most of the day, it seemed the cow was doing her best to get her calf used to the water.  In fact, the calf now looked a lot more confident while in the river, and was becoming a powerful swimmer. 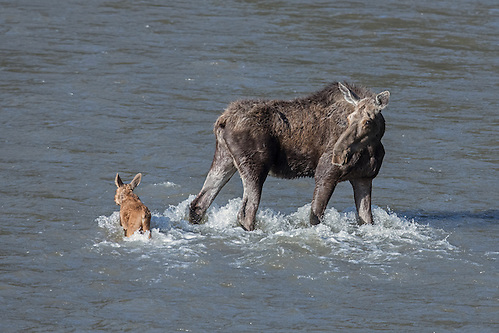 The tiny calf enters the river but returns to the island once the water becomes too deep for him.

As the days passed, the moose calf grew noticeably stronger.  Now when he ventured into the river in pursuit of his mother, he was no longer swept downstream when he reached the deep water but was able to swim against the current and return to the island while his mother continued onto the shore to forage.

After ten days on the island, I could see that the calf was just about ready to make the crossing.  The river levels had dropped dramatically due to the cool weather and each day the calf continued to make forward progress towards the shore.  When the little calf made his initial attempt to cross the Shoshone that day,  for the first time ever he made it just a few feet from the shore. His mother tried to coax him on for the final few feet but the strong current pushed him far from the shore.  Once that happened, the calf turned around and swam back to the island where he played and frolicked while his mother stayed on the mainland and foraged for a few hours. 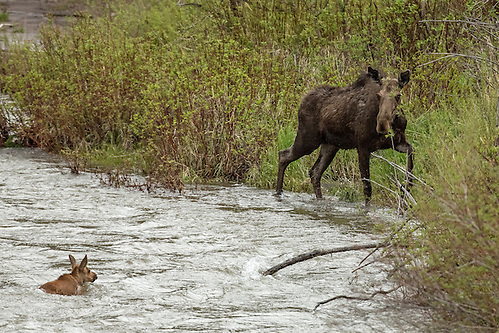 So close yet so far….the calf approaches within a few feet of the shore, but is unable to swim the entire distance.

As the day wore on, the calf made five separate attempts to cross the river, turning around each time he hit the same deep spot near the shore. After his second attempt, he seemed to have had enough, but the cow was insistent that he keep trying, and try he did, but he just couldn’t do it. After spending almost an hour in the river, the tiny little fellow was so exhausted that he could barely put one wobbly leg in front of the other. When he finally gave up and returned to the island, he stood frozen in the shallow water for nearly thirty minutes.  Eventually, he turned and gazed longingly at his mother on the mainland, but he didn’t make any more attempts to reach her and walked further into the island where he curled up and went to sleep. 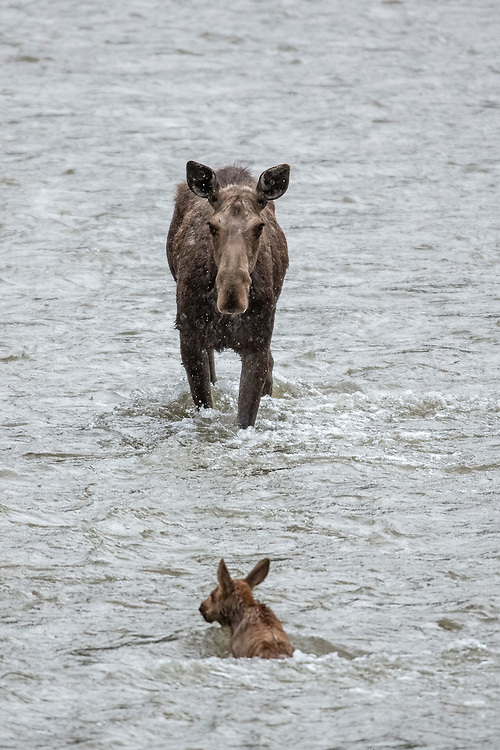 As his nervous mother looks on, the tiny calf struggles to cross the river, but just can’t quite make it.

When day eleven rolled around, I was certain this was the day that the calf would finally make it across the mighty Shoshone.  After the exhausting ordeal of the previous evening, the calf was reluctant to enter the water and refused to leave the island even as his mother beckoned him to follow. The persistent cow walked back and forth to her calf nuzzling and licking him, trying desperately to coax him into the river, but he would not move.  Eventually the cow walked to the middle of the river and waited.  After many minutes passed, the calf finally entered the river and slowly approached his mother . As he had done on previous days, I thought the calf might turn around when he reached the first patch of deep water.  It seems the cow thought the same thing because when she saw her calf hesitate, she used her long legs to block some of the current, making it easier for her calf to continue on. He then hit another area of deep water near the shore, but instead of letting the current take him like he did before, he continued swimming towards his mother who waited on shore. After much effort, the tired little calf used every ounce of strength he had left to climb to the mainland and reunite with his mother. 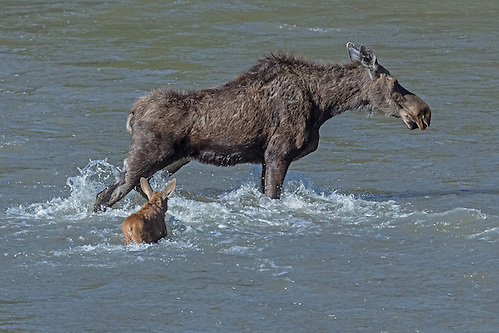 The cow blocks the current with her powerful legs, helping her calf continue forward. 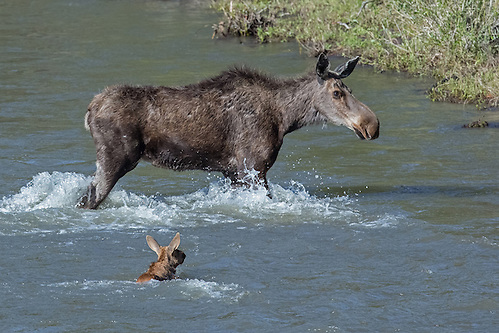 With the shore in sight, the cow moves forward, keeping an eye on her struggling calf. 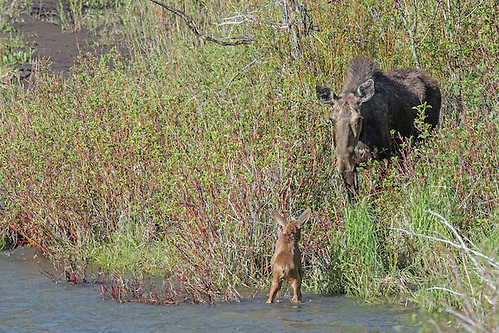 After dozens of attempts, the moose calf finally reaches the shore as his mother waits. 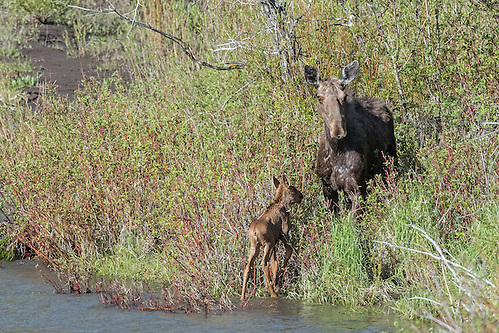 The cow and calf bid farewell to the island after their eleven day adventure comes to a close.

As I watched the moose cow nuzzle her calf on the opposite shore, my eyes started to fill with tears since I knew I would probably never see them again.  Scenes like this happen every day in nature, but I felt privileged to observe the daily struggle of this cow and calf and tell their dramatic story of survival. I haven’t seen the pair since that last day, but have been told by those who have that they are both doing well and the calf is continuing to grow strong.  I still miss these two, but hope someday soon we will meet again along the Shoshone. 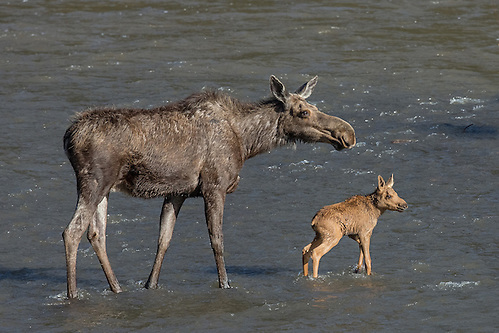